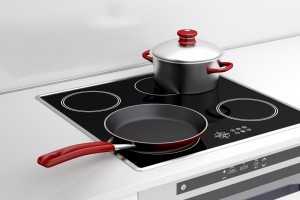 What is Induction Cooking?

Using electric cooktops that use an electromagnetic field in order to heat up any vessel containing food without heating up the cooking surface or the kitchen is called induction cooking. How does an induction cooker achieve this?

The electronic power helps power a coil that produces a high frequency electromagnetic field. The field then penetrates the cooking vessel that is made up of magnetic material and sets up a circulating electric current that generates the heat for cooking. The heat that is generated in the cooking vessel is then transferred to the food in the vessel. So, when the vessel is removed from the cooktop, it automatically stops transferring the heat to the vessel.

What else are the features of an induction cooktop?

The electromagnetic properties of a steel vessel tend to concentrate the induced current in a layer near its surface that is quite thin unlike the other metals. The cooking surface of the induction cooktop is prepared from a glass ceramic material that is a poor conductor of heat and therefore only a little heat is lost while cooking food.

The cooking vessel is either prepared with either steel or with iron. The high magnetic permeability of the material decreases the depth of the skin, thus concentrating the current only near the surface of the metal. In order to reduce the skin effect, it is made from litz wire, which is a bundle of many small wires that are insulated.

The coil has many twists and turns, whereas the bottom of the pot forms a single shorted turn. This forms a transformer that decreases the voltage while stepping up the current. 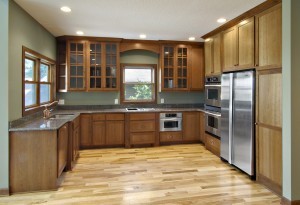 You could instantly adjust the induction cooktops with great precision as well as instantly. Where the inertia of traditional cookers picks up quite slowly and you have to adjust the energy flow manually after that, induction cooktops offer you the automatic adjustment of the energy flow upon adjusting the element setting once manually. This is because the electromagnetic activity in the cooktop triggers electromagnetic activity in the cooking vessel.

The induction cooktop has an additional safety feature as compared to traditional cooktops or stoves. It does not get too hot, since the heat is created within the pan itself, making it safe to touch. It therefore implies that the chances of getting your hands burned are much lesser than on a traditional cooktop. What’s more, the tendency of the pan to turn off the dial as soon as you turn off the heat is almost immediate, leaving the pan to cool down.

The heating process of an electric induction cooktop is much different than that of a traditional stove or a cooktop, automatically making it energy efficient. Through firm contact with the pan or the cooking vessel and by releasing lots of heat around the pan, the heat gets generated within the cooking vessel itself. The heat gets to the food rather than to the vessel and it also therefore does not heat up your kitchen in the process.

If you are considering remodeling your kitchen, then an induction cooktop should therefore be at the top of your list.