What is a French Drain for a Basement 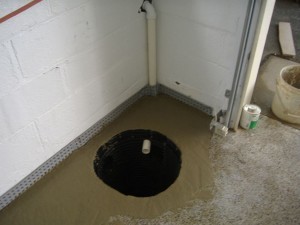 A basic French drain is a rock and gravel filled
trench. In some cases that trench also contains a perforated pipe which channels the ground and surface water away from the basement area. The perforated hollow pipes are placed along the bottom to drain the collected water. To prevent clogging the size of the gravel varies from coarse to fine. The coarse grains are placed in the center and the finest grains are placed in the outermost layer of the trench.

Another use of the French drain is to circulate water. They are also used relieve ground water pressure. French drains are installed using two different methods: 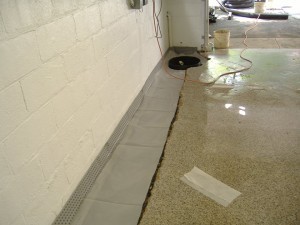 An outside French drain is dug outside the perimeters of the foundation of the house to drain the water. These drains can work without any maintenance for up to 10 years. On the flip side, these drains can fill up which can lead to a flooded basement. To improve the function of the French drain there are now specially designed sump pumps which helps the water to drain out of the foundation. Sump pumps are also effective for those houses which do not have any inline or slope for gravity to work and drain out water naturally from the foundations of the house. One of the reason it is not used very often is the maintenance of these drains can be costly and labor intensive. To access an outside French drain the owner might have to remove their yards, porches and /or walkways.

French drains installed inside the house underneath the basement are one of the most commonly used methods. To install this drain the concrete is removed to the footing of the house. Next a layer of stone is laid and a perforated drain pipe is placed on top. The water collected from the basement wall floor joint and a pump removes all the collected water from the house and its foundations.

The chances of an interior French drain to clog are much less as compared to an exterior French drain. Interior drains are much easier to maintain, as those pumps needs service and maintenance once a year and the complete system works flawlessly. Contractors should pay close attention to the quality of sump pump. A high quality sump pump drastically reduces the probability of basement flooding. On the other hand the cheaply made plastic sump pumps burn out easily and can lead to water accumulation which can lead to basement flooding.

French drain since its invention has gone through many upgrades. Still the concept is the same and effective as their early counter parts.