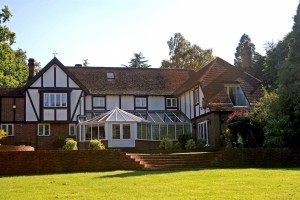 Tudor style homes came from the techniques used in the medieval era. In the 1920’s people around America caught on to these types of homes and the style grew in popularity. Tudor Style Homes remain popular in the suburbs. They are known by many other names. A few of the names they are known by are Storybook Style, Cotswold Cottage, and Ann Hathaway Cottage to name a few.

You will usually see these homes with stucco, brick, or stone siding. They often place a chimney near the front door. The chimney will be constructed of brick or stone. The roof is steep with cross gables. A gabled roof is the kind of roof you usually see kids draw. Gable refers to the triangular wall between the edges of the roof. Casement windows with small panes are popular with this type of house. A casement window is the kind that has hinges on the side and they open outward. A Tudor style home is usually equipped with dormer windows. These windows are located on the roof of the house. They are placed there as a source of ventilation or light on the top floor. It contains small arched doors instead of the typical door you will see in a house.

The rooms tend to be small and irregularly shaped, unlike the large rooms you are accustomed to. The rooms on the top floor will have sloping walls due to the sloping roof. Most modern homes have a symmetrical design while Tudor style homes don’t. Tudor style homes have an asymmetrical layout. An asymmetrically designed home is more complicating to build and they are very sophisticated designs. These homes resemble the homes constructed in a region in southwestern England in the medieval times. The chimneys are usually bigger than you would see on modern homes. They dominate a side or the front of the home. American architects were amazed by the rustic homes. This gave them the idea to build modern versions of these medieval cottages. These homes were expensive to build so they aren’t as popular as they were before World War two. Many of the older Tudor Style Homes are being restored instead of people building new homes of this type.

A Tudor Style home is attractive for two reasons. They are solid and they require very little maintenance, unlike modern homes that aren’t built well and require a lot of maintenance throughout the years. People have come to find out that it is less expensive to remodel a Tudor Style Home than building a modern home. They choose to renovate the homes since they are built better than the modern homes. Instead of a porch people are building pavilions. The pavilions won’t take away from the look of the home and it will allow you to have a space for family time outdoors. It is also recommended that you add a few metal pieces such as older styled lamps at the door or metal awnings on your windows. The metal accents will make the house more appealing in modern times.