How to Plan a Tub to Shower Conversion 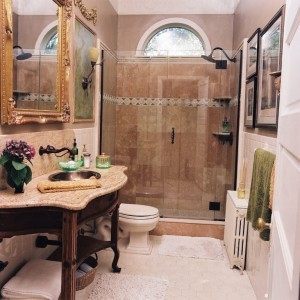 The tub to shower conversion is quickly becoming one of the most popular remodeling projects throughout America. More and more people prefer a tub-less bathroom (in the past 5 years or so, the number of people who prefer shower-only bathrooms has increased by almost 50%, and now they represent the majority of the population). On the other hand, real estate agents are slower to catch up with the times, and they still insist that a house without a tub has a lower market value. As such, most houses that are sold have a tub in the bathroom, and the first thing the new owners do is covert it quickly to a shower. 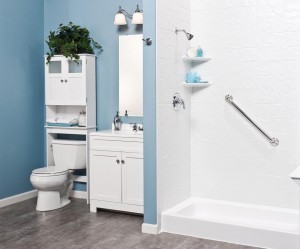 Depending on the settings and modifications that need to be installed, this can actually be a very quick and pain-free process. Assuming the water supply and the drainage pipe are in the right places already, a contractor may be able to finish everything within a single day.

Basically, if the bathtub is in an alcove, and if you don’t want to adjust anything else in the room, then you’re in luck and everything can be done quickly. If you’re into DIY, you can make the tub to shower conversion your first project in your new house (though, be careful – if you have no previous experience this may be quite challenging and will leave your family without a proper washing space for a long period of time. If you don’t have a second bathroom to use during this time, it’s safer to hire a contractor). 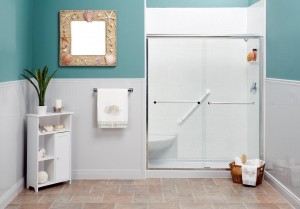 Then there are rooms with additional challenges. The most common problem is when the bathtub was located directly under a window. That wasn’t a problem before, but it definitely will be if the shower goes in the same position. Some people recommend simply blocking that window with some thick blinds – though this is not such a great idea for various reasons. First of all, it means you’ll get no natural light while showering – and, let’s face it, it’s one of the most pleasant moments of the day, why ruin it like this? Second, the blinds are sure to get wet, and to retain moisture and develop mold over time. Last but not least, it’s simply inconvenient to walk in the shower every time you want to open the bathroom window or draw the blinds.

Considering that the tub to shower conversion is a project with rather long-term consequences, avoid quick and cheap fixes like that, and just find the proper placement for the shower. The closer the new location is to the existing water pipes, the lower the costs. If it’s too far away, it can quickly add some hundreds of dollars to the total costs (fortunately, though, bathrooms are rarely big enough that this becomes a budget-breaking problem).

Before you start, do what they say: measure twice and cut once. The National Kitchen and Bath Association has a set of standard measurements, so make sure to check out their recommendations and measure your space carefully, to be sure your new shower will fit in nicely, before you remove the tub and it’s too late to go back.