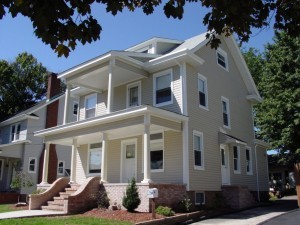 Traditional style homes are the most common style in the United States. These homes are elegant homes. They are popular in upper-class communities. They are a mix of several different styles. It makes them easier to customize since there is no right particular way to design them. The designs are generally straightforward. While there is a mix of several different designs, there is also some basic features that are consistent with this style of home. These homes are usually one story floor plans. However, it isn’t rare to see lofts or extra rooms on a second story in these homes. The houses are generally constructed of brick or wood. People of all ages like the Traditional Style Home. They are also referred to as American House or American Style floor plans.

There isn’t a particular size or shape of these homes. The possibilities are nearly endless when it comes to that aspect of the house. You will see these houses carry many shapes and sizes. Rarely will they be identical.

The house has an open floor plan. The kitchen usually overlooks the living are. Sometimes you will see an island separating the two but never an entire wall.

The house will have several windows across the front. The windows on the first floor will generally be large windows which are useful for allowing natural light into the room. The most elegant Traditional Style Homes can be seen with larger windows than others. The windows will also have an arch at the top.

All of the homes will have a fireplace. The location of the fireplace is up to the builder. Generally they try to place them in the living area since that is where most of the families time is spent.

The home will have a front and back porch. The size of the porches varies as well as the design. Some of them will have porches big enough for the family to gather while other will have a small porch.

A laundry room will be found in these homes. There isn’t an absolute location for them as long as they are on the first floor of the house. The laundry rooms are generally large rooms.

All Traditional Style Homes have a garage. Some have a one car garage while others have a garage big enough for multiple cars. Above the garage, you will sometimes find the entrance to an attic.

It is hard to tell what kind of homes these are if you don’t know what you are looking for. These houses are popular throughout the United States. They are more prevalent in the high-class communities and for people with large families. These homes are generally not bought by first-time home buyers. However, these homes do appeal to young people just as they do middle aged people. Rarely will you see an elderly person owning a Traditional style home unless it is a one story floor plan.