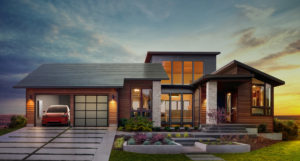 Tesla Motors Elon Musk may be making another critical impact on society. He has been approved by shareholders for $2.6 billion to tie up in solar roof shingles. In his speech he stated, would you like a roof that looks better than a normal roof, last twice as long, cost less and by the way generates electricity’ why would you get anything else.” Who wouldn’t raise their hand?

Not only will you be saving money in the long run on your roof, you’re also saving money every month on utilities from energy savings. The potential to hit two birds with one stone is attention grabbing. Tesla brings a well-established company reputation and customer satisfaction to a form of business customers may be skeptical and hesitant about. For those who are worried about appearance you’re in luck. These are not big bulky panels. From the street the cells are not visible to the eye. Elon Musk compared the solar roof to the solar cars. As the cars become more appealing in appearance the more popular they have become. He has taken this same approach with the solar roof. He asked an audience in his speech if they realized all the homes they were surrounded by had solar shingles and the audience was puzzled. That is how unnoticeable they have become. 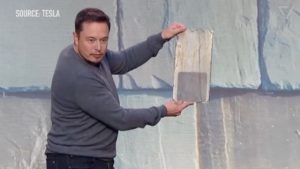 During the day the shingles absorb solar energy filling the battery while at night using the energy absorbed. Tesla’s Solar roof tiles are made with durable, long lasting tempered-glass in four different appealing styles that complement and energize your home. These styles are Tuscan Glass Tile, Slate Glass Tile, Textured Glass Tile, and Smooth glass tile. Elon Musk is not only changing the appearances of solar roofs but is also keeping costs low with long term savings as a main goal.