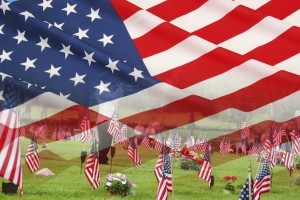 Memorial Day is a United States federal holiday that is celebrated on the last Monday of every May and honors the men and women who have died serving the country’s military. Originally the holiday was known as Decoration Day and started as a way to honor the 620 thousand Union and Confederate soldiers who died in the American Civil War. It began as a way to honor the soldiers and heal the wounds between the two regions. It shifted in the twentieth century to commemorate all Americans who died in the armed forces. It is a day for visiting grave sites and memorials, and it’s common for people to place American flags as well as flowers on soldier’s graves. It is also traditional practice to quickly raise the American flag to the top of the flagpole and then slowly lower it down to half-staff, remaining like this until noon. At that time the flag is then raised again to the top of the pole as a symbol of the country’s strength and as a reminder that the soldier’s sacrifices were not in vain. Parades are also held on this holiday, on large and small scales, featuring marching bands and servicemen, from the National Guard to military veterans. In smaller towns it’s common for the parades to feature students in the band. The famous auto-race, the Indianapolis 500, also runs on Memorial Day, or the Sunday before, and has been doing so since 1911. END_OF_DOCUMENT_TOKEN_TO_BE_REPLACED