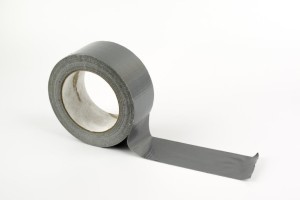 Although duct tape has been around for over 70 years, it has not always been known as duct tape. Originally it was just an adhesive tape invented by a 3M employee in the 1920’s. In 1942 Johnson & Johnson began manufacturing what was known as the WWII Military Version. This version was made from a similar cloth medical tape which was one of their best sellers. It was good moisture protection and worked on just about everything that needed to be fixed. When the housing industry became aware of this nearly indestructible fix-all tape, it began using it for joining air conditioning or heating ducts. It’s color changed from army green to silver so that it would match the ductwork. What an incredible invention!

So exactly what can it fix?