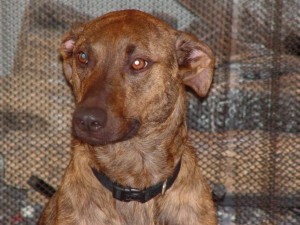 I’m certain that I have told most of you this story before. However, I feel the need to rewrite the story of how we got Slugger, not for your benefit, but for mine.

It was a Friday morning in December of 1999. As I was getting ready to leave for work, my son Andrew, who had just turned 7, came to talk to me with a newspaper in his hand. The new, but avid, reader circled an ad in the classified section. Andrew read it out loud, “6-week old male Lab mix with cage and food for $60.” He then said, “Dad, I have some money. Can you take that and buy the dog for us?”

What could I say to that? I asked my wife to call about the dog and try to make an arrangement for me to meet this Lab mix on my way home after work. Before leaving though, I explained to Andrew that he should not get his hopes up too high in case the dog was not the right fit for us for some reason. 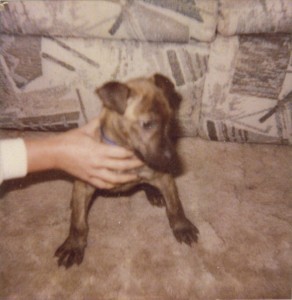 When I arrived at the house, the owner and I exchanged pleasantries while I held the brindled color puppy. As it turned out, the guy knew a coworker of mine (Mike Trezza). He had bought the puppy for his father, who was recovering from heart surgery, to be a companion. His father did not want the dog, so if not sold he was going to the dog pound. After several minutes he asked if I wanted the dog or not. I had already told him about my seven-year-old circling the ad in the paper so if I didn’t bring home a dog, I might end up in the dog house.

Andrew was at indoor soccer practice when I got home. So I quickly brought the puppy, cage, and food upstairs into Andrew’s bedroom. I waited patiently downstairs. When Andrew came through the front door he excitedly looked for the dog. Finding nothing, he looked at me and I said, “Andrew, let’s go upstairs, we need to talk.”

Inside his room, he sat on the bed and I sat by the window. I guess from his vantage point he did not see the sleeping puppy in the cage because he said, “Dad, you don’t have to say anything. I know it was probably a bad dog so you didn’t buy it.”

Before I could reply, Andrew finally noticed the dog. He jumped toward the cage, pressed his face against it, and then turned to me and exclaimed, “Dad you’re the greatest!” As he hugged me, I explained chores and responsibilities. Andrew blurted out about a dozen yeses before getting back to the puppy. 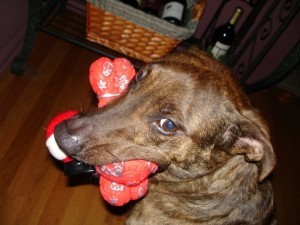 Without too much debate, Andrew, the consummate baseball fan, named the dog Slugger. The name is a shortened version of Louisville Slugger, the most popular baseball bat manufacturer.

A week later, Lori took Slugger to the veterinarian to get a check up and receive any necessary shots. Upon entering the office, the nurse said, “Oh my, what an adorable pit bull you have!”

My wife nervously replied, “He’s not a pit bull. The guy said he’s a Lab mix.”

The nurse said, “Yes, part Lab, but he’s definitely a pit bull.” If Lori had heard this, the day after I brought Slugger home, he probably would have needed a different home. However, after seven days, Slugger was already a loved part of our family. 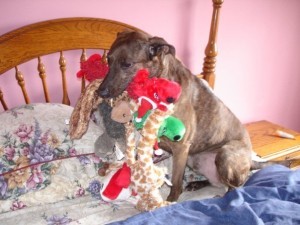 The fourteen plus years, that we were lucky enough to have Slugger, were enhanced by this amazing dog. Smart, playful, athletic, graceful, loyal, obedient and a very good listener; qualities that us humans do not maintain as well or for as long as man’s (or woman’s) best friend manages to do. Slugger and I would have lengthy conversations every day especially before bed time. He always agreed with everything I had to say. He never minded if I had bad breath and actually, I think he preferred it.

To this day, Andrew contends that he never said, “Dad, you’re the greatest!” that night. Slugger and I know the truth; remember it quite well, and rather differently. Those words meant so very much to me…and Slugger. We can both take that to our graves. Unfortunately, Slugger got to his, before I mine. 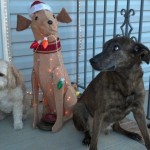 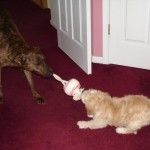 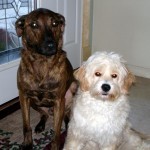 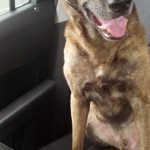 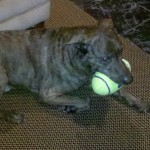 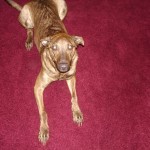