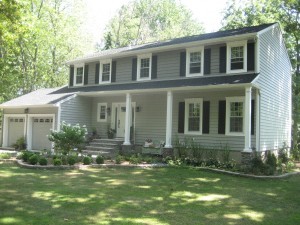 This homeowner met with Mark of Excellence Remodeling at the Brookdale Home Show.  After speaking with several vendors at the show they were impressed by their portfolio of vinyl siding projects that had transformed many homes in Monmouth County and across New Jersey. They could not quite determine why their projects seemed to result in a more sophisticated finished look. The event staff were able to point out that simply replacing old siding for new with a generic application would not enhance the value of the homes overall appearance.  Mark of Excellence Remodeling prides itself on the function and efficiency of their work but also Design creativity using components from several manufacturers to put together an outstanding finished product. For that reason; they have been featured on HGTV and in many other well-known home and garden specialty television shows. 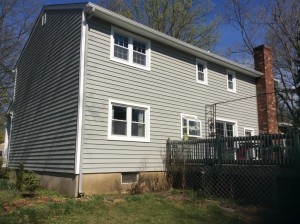 The homeowner wanted a completely new look and Mark of Excellence Remodeling was invited to create a Design that would bring new life into the old facade. This project had an unusual funding source and the work was not only to be inspected by the town of Shrewsbury; but also required an additional independent assessment by a building professional on behalf of the funding source.   Although the home’s exterior was old shingle siding in a dark brown tone; the homeowner wanted to get far away from that working in tones of Gray or White.  The Project Designer had concerns that the front porch post supports had deteriorated significantly; and new supporting piers were recommended and built with in a traditional limestone from Owens Corning cultured stone. New recessed panel, tapered columns from Duralite were installed to support the porch roof from the limestone topped piers. 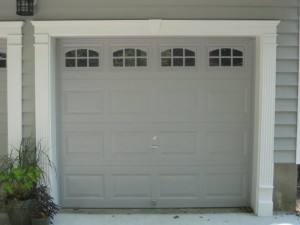 Since the home was close to the shore it was the desire of the owner to create a Shore Colonial feel and to give the home a more substantial presence, the color choices and design components were needed to meet that criteria.  The Project Designer recommended Cape Cod Gray as the predominant theme of the home with white accents. Solid core insulated siding from Prodigy; in a clapboard representation was chosen for the energy benefits; and because the Gray hue seemed most authentic to the customer.  Window headers with keystones from the Exterior Accents collection by Alside were installed along with the traditional black shutters in low maintenance vinyl that picked up the color of the black GAF dimensional roof. The Shore Colonial theme was further supported with white gable vents, white fascia and invisible soffit venting.  The two new color coordinated garage doors with colonial glass top panels are surrounded by pediments, mantels and key stones to complete the Shore Colonial theme.  The independent inspector was so impressed by the complete exterior makeover he referred Mark of Excellence Remodeling to another homeowner in Middlesex County New Jersey.

Here are two views of the home before the project: 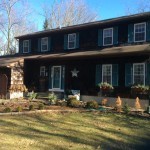 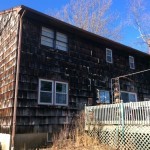 The transformation for this Siding Project in Shrewsbury Monmouth County New Jersey looks like a brand new home.