Design Build Planners  recently had the opportunity to interview Richard D’Angelo of CraftPro Contracting LLC a highly respected professional in the remodeling industry.

Q: What is your favorite home improvement TV show?

A: I don’t have time to watch much television, but occasionally I’ll watch HGTV. I think my favorite show is “The Vanilla Ice Project” because it’s hilarious (everything Vanilla Ice does is funny). I especially enjoy watching V.I. do demolition work while dressed in parachute pants and a basketball jersey (not really appropriate workwear). On a more serious note, HGTV shows can be entertaining while also providing homeowners with ideas for remodeling projects, and I think there’s definite value in that – for homeowners and contractors. In fact, several friends and relatives of mine have had work done on their homes after being inspired by something they saw on HGTV. 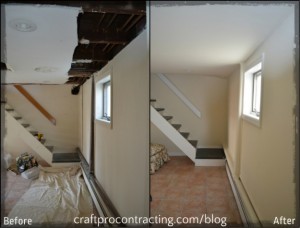 On the other hand, I’ve seen friends, family and even customers take on DIY home improvement projects they saw on a television show and the results were pretty bad. This is where homeowners should be careful: the shows are made to entertain, not instruct. While responding to this interview I put on HGTV and watched a crew of guys construct a pergola as part of a large home makeover. The television segment of the pergola construction lasted less than 10 seconds and showed some quick shots of the crew securing pieces of the pergola together with screws. I can see how a homeowner might think that he/she can do that, based on how easy the show made it seem. I think most professionals would agree that constructing a pergola

is not a simple, easy DIY task – not even for the handiest DIY enthusiast. On the same TV show the exterior of the home was painted. That segment lasted about 5 seconds and showed some guys brushing paint on cedar shakes. Now, painting is arguably the #1 project that homeowners take on as a DIY job, and I’ve seen some pretty well-executed DIY paint jobs. But the show didn’t mention anything about the preparatory work necessary for achieving a decent exterior paint job, much less anything about cedar’s acidic tannin and how it bleeds through even the highest quality latex or waterborne exterior paint. That’s not a fault in the television show; it’s just an example of the fact that these shows are made to entertain people – they aren’t tutorials.

I wrote a lengthy article about extractive bleeding of cedar’s tannin and the paint discoloration that occurs as a result (*here’s the link, if you’re interested: Cedar Tannin Bleeding and Staining). I’ve seen too many homes with discolored painted cedar, and I’ve heard too many horror stories about failed paint jobs and other DIY projects. My point? There are details and complexities to every part of a home, and there are complications involved with every type of home improvement, repair or maintenance task. Homeowners should be cautious about DIY-ing a job they watched on a television show. It’s never as easy as the show makes it look!

Q: What is a question that homeowners should ask about a painting project but never do?

A: Homeowners should ask their painting contractor to be deliberate, detailed and thorough when describing the scope of preparatory work for any type of paint job. On CraftPro’s home improvement blog I write extensively about painting preparatory work: it is the most important part of a durable and beautiful paint job. This includes tasks like sealing and blocking residual wallpaper paste on previously papered walls, preventing extractive bleeding of cedar’s acidic tannin, priming existing oil-based paint before applying latex/waterborne paint… the list goes on and on. Unfortunately, there are painting contractors out there that skip the prep work in order to get jobs done quickly and increase profit margins. These “hurry-up” jobs won’t last: if the proper preparatory work isn’t executed thoroughly and with attention to detail then the topcoat will ultimately fail sooner rather than later. Homeowners should closely examine the warranty in the contract for the paint job they are paying for. Does the contractor stand behind his/her work for a considerable length of time? We warranty our paint jobs for up to five years, and never less than three. If you’re going to pay for a professional paint job, it should be guaranteed to last. Homeowners shouldn’t be afraid to ask questions – a quality contractor won’t have problems answering your questions and being open and honest about the scope of work.

Q: When finishing a basement how do you address access to shut off valves and such?

A: Almost every basement has plumbing and electrical fixtures that need to be accessible after the basement is finished. In order to allow access to shut-off valves we discuss options with homeowners. Some homeowners opt for a really simple solution: a small piece of removable drywall or plywood to cover the valves while still allowing access to them. But when the valves are in a very visible place on the wall a more aesthetic solution is to frame around the valves and install a metal or plastic plumbing access door. Or, better yet, a paneled wooden door with its own casing (trim). Electrical junction boxes can be an issue also, especially when the box is installed in the basement’s ceiling and the ceiling is going to be drywalled (this is why so many basement finishing projects call for a drop-ceiling installation: to allow access to plumbing and electrical fixtures). When this is the case, an electrician needs to be brought in to move the junction box so that drywall can be installed around it without it being hidden. 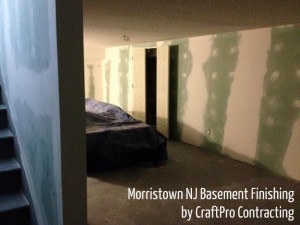 Q: What is the most unusual project a homeowner has ever asked you about?

A: The most unusual project a homeowner has ever asked us to execute was remodeling a backyard tool shed into a bedroom. There were no plans for a bathroom (or any plumbing whatsoever), nor was there any electrical supply to the shed (or plans to provide electricity). After some in-depth discussion with the homeowners about the scope of work, permits, etc. the homeowners – who knew the job was a long shot – decided that the project was not worth it.

Q: What advice would you offer a remodeling company owner just starting out?

A: To the remodeling company owner who is just starting out I would advise him/her to get ready for 7-day work weeks, very long days, and a lot of sacrifices. It’s a tough industry and it requires a lot of work, but if you’re like me and you love what you do: it’s worth every minute. Especially when you see the look on a happy homeowner’s face after a successful home improvement. Nothing beats that.

BONUS QUESTION: What is your favorite New Jersey restaurant?

CraftPro Contracting LLC is a Morristown, NJ based home improvement contracting company founded and operated by Richard D’Angelo with the help of his brother, Michael. They serve the greater Morris County area with quality renovations in painting, carpentry and handyman services while focusing intensely on customer service and satisfaction. Their dedication to their community is evident in the reviews and testimonials provided by their customers.