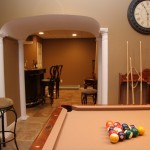 If you’re looking for some great basement remodeling ideas, you’ve come to the right place. When was the last time you spent any quality time in your basement? If you’re like most people, the answer is probably “never”. It’s not something to be ashamed of, most people simply use their basements as a place to store things they aren’t currently using, and only go down there to add more stuff to the collection of unused junk.

What most people don’t think about though, is that the basement is a large, open room, roughly the same size as the first floor of their house. People often aren’t very efficient with their usage of space in the basement, as they assume they won’t use it for anything else and just let their stuff spread out. Furnished basements are becoming more and more popular everyday though, and today we are going to be offering up some ideas to help you get a whole lot more value out of your basement. 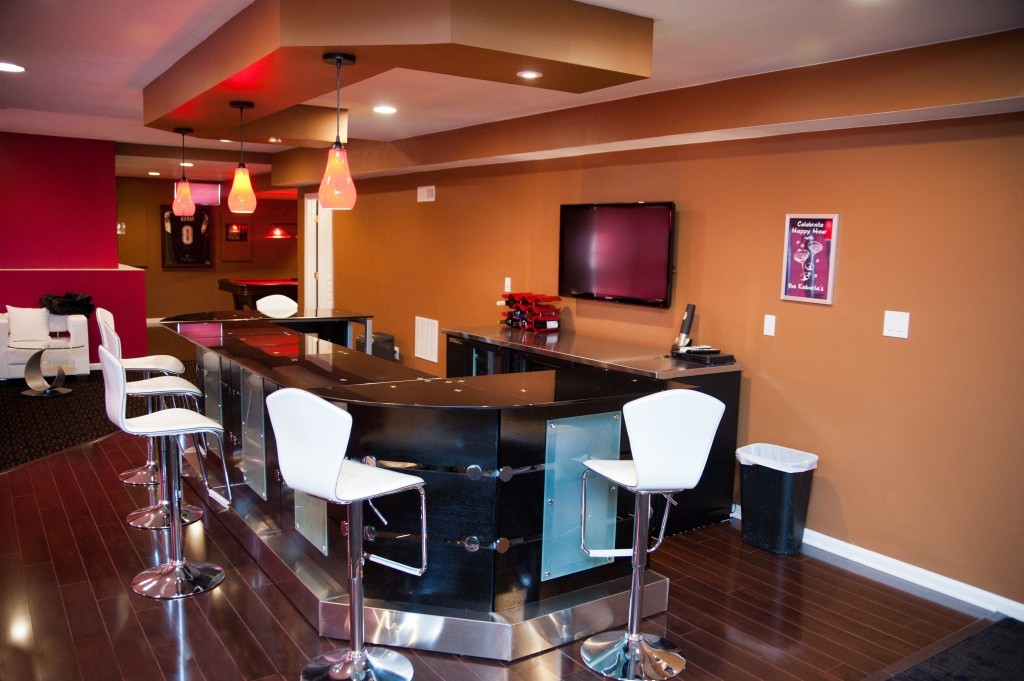 Get mold and moisture issues under control before doing anything else – This is probably the most important part and should be the first step for every basement. People usually don’t care about mold or moisture issues in their basement because they generally don’t care too much about the stuff they put down there. If you currently have mold or moisture issues, they will be much easier to deal with now, compared to after your basement renovation. If you don’t know how to take care of these issues, or you have fairly bad mold and moisture issues, contact a specialist. Not only will they be able to do a much better job, getting that close to mold will result in you breathing it in which is not good for your lungs in any way, shape or form.

Get rid of stuff you don’t need – This is usually the biggest hurdle people have to get over prior to beginning their basement improvement in NJ. They have so much stuff down there, they can’t imagine where they will put all of it. Chances are though, you haven’t used any of that stuff in the last year or so, and if it were to just disappear, you probably wouldn’t miss any of it. Go through your stuff and decide what’s essential, and what’s not. This is not the time to be a pack-rat.  Be diligent and don’t save things you’ll probably never use again. Before long, you’ve probably cleared out half of your basement, and this comes with an extra advantage. You can have a yard sale, sell off all this stuff you don’t need anymore, and make some money that you can put towards the remodeling of your basement. Consider donating anything that doesn’t sell to charity. It will make you feel good about yourself for having done so.

Find a better spot for all the stuff that remains – We know you won’t be able to throw all of your stuff away. Some of it is valuable despite infrequent use and lots of it has sentimental value. For all of these things, figure out how much space you realistically need to store it in. You can then create a small room in the corner of the basement which can be used as a storage room for all this stuff. Most people are completely amazed to find out that an entire basement worth of stuff can be fit into a small room in the corner after throwing out things they don’t need and arranging the rest of it efficiently. 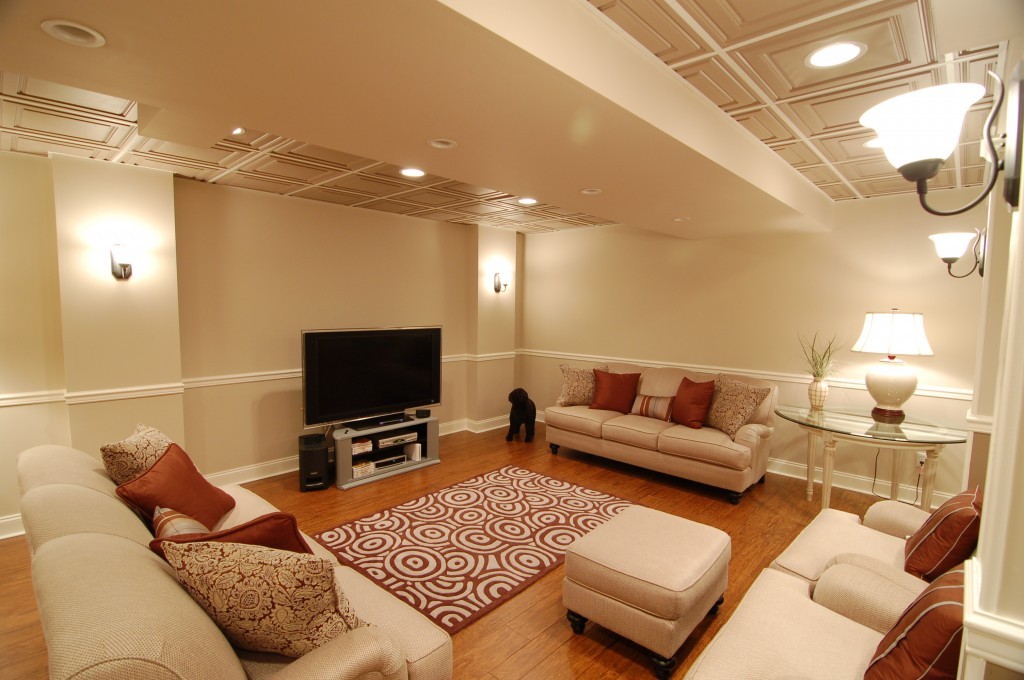 Contact a reliable local basement remodeling contractor – There are lots of good ones, and they can help you save a lot of time, headaches and money for the simple fact that they’ve done this so many times before. Work with them to create a floor plan, especially for a storage room so you don’t end up with a room that’s too small to store all your stuff. Also make sure to work out a budget with them, and follow all other tips we’ve posted previously about how to select an honest and trustworthy NJ basement remodeler, or remodeling contractor of any kind.

Decide what kind of look you’re going for in the basement – Some people want to have a furnished basement, but actually dig the fact that it’s still a basement. These people might keep the walls cement, but will paint them a color that’s a little easier on the eyes. Other people even like to keep the floors cement, just more polished. On the other hand, it’s totally possible to lay some studs, and then put up drywall to cover up an ugly cement wall completely. You can also lay down tile, wood or laminate floors, and it will change the look of your basement entirely. If you’re used to your basement being nothing but a large, ugly storage space, seeing it with new walls and floors can put everything into a whole new light. And speaking of light….

Put some care into the lighting – Your basement is likely below ground level, and if you have any windows above ground level, they are probably small and just barely above ground level. Make sure to give the basement ample lighting – much more than it had before. You probably didn’t care about lighting in the basement before. In fact, good lighting would just expose how dingy and dirty the basement actually was. Now that it’s a finished basement though, you’ll want to make sure things are nice and bright, and since you’ll be hanging out down there, you won’t want to have to strain your eyes. Consider adding more lights than you think you’ll need. It’s always easier to turn a light off than to install a new one because the basement is too dark. 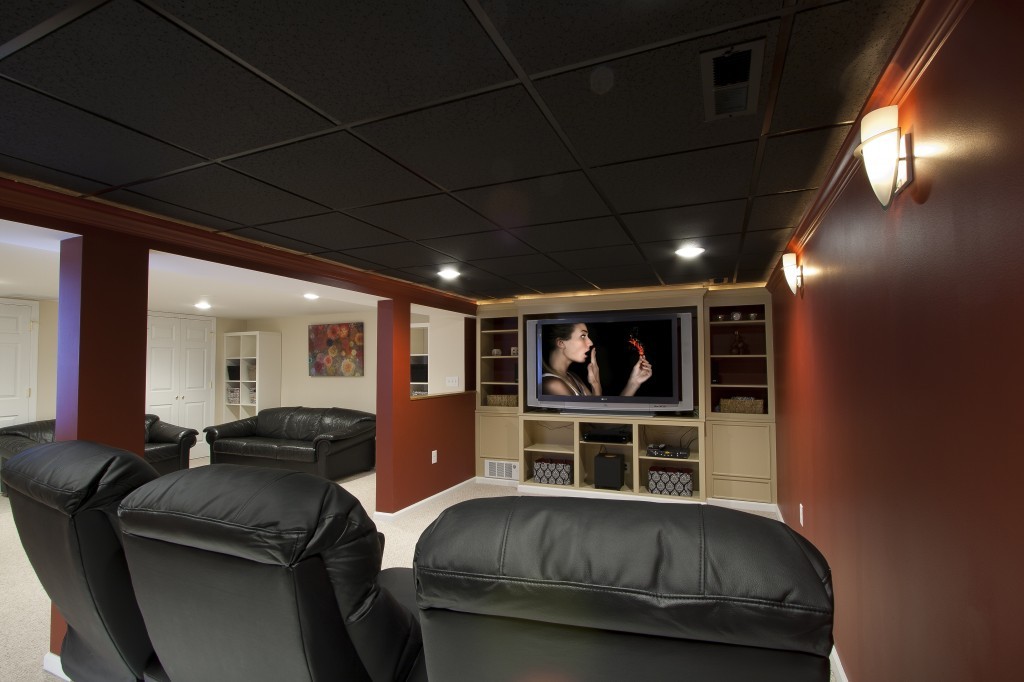 A furnished basement isn’t just a great way to maximize space, it can turn into a great bedroom for the oldest child in the house to give them a bit of extra privacy. Just make sure you get your mold and moisture issues under control first, and you probably will want to start spending more time in the basement too.

If you follow the above tips and some of the other helpful tips on our blog, you will be in a much better position to begin your new basement project.  Knowing where to start is at least half the battle. Remember, to speed up your upscale basement remodeling process, while saving time and money, you can start with the Design Build Planners.

The Design Build Planners have been helping homeowners build their dream basements for many years throughout New Jersey, specifically Monmouth County, Ocean County, and the Jersey Shore. If you have questions or are looking to get started with your basement remodel in New Jersey, schedule a phone consultation with one of us.