Today, Organic Gurlz Gardens of Fort Wayne, Indian will be sharing information on Moles and Gophers in Your Garden.

What Exactly Are Moles?

Moles feed on insects and insect larvae, but earthworms and white grubs are their acquired taste in fine dining. This is kind of a win-lose since grubs are bad for the garden and earthworms are awesome for the soil.

The burrowing insectivores build new feeding tunnels constantly and rarely ever use the same one twice. The result is an uneven and unsightly garden and outdoor living space.

You may find entry and exit mounds, which are usually round and symmetrical, pushed up in volcano-fashion by the mole. The hole usually has dirt in it but remains visible.

Given a choice, moles pick moist, sandy loam soils over dry, heavy clay soils to make its home. They are most active during the warm, wet months, although they live underground year-round. They grow to be 6 to 8 inches long and have gray to black velvety fur. Their large front feet have long claws that dig much like a hoe.

The Best outcome for your garden is Organic Gurlz Gardens!

We guarantee our raised garden beds for 5 years, with maintenance and care. 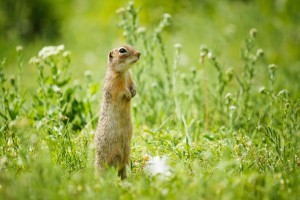 Unlike moles, which are primarily carnivorous, gophers are strict vegetarians.

Gophers, are also sometimes referred to as “pocket” gophers from their habit of storing food bits and nest materials into enlarged fur-lined pouches on each cheek.

The word gopher itself comes from the French honeycomb, and probably refers to the effects of their compulsive tunneling. There are about 30 species of gophers.

Gophers create fan-shaped mounds that are often large enough to cause damage to passing farm equipment. It is not uncommon for gopher tunnels to interfere with irrigation systems, dams, fields and, of course, our precious home organic gardens.

Do Moles and Gophers offer anything GOOD for the garden?

Moles and Gophers seem neutral to your home garden.

While they eat weeds and unwanted insects, they can eat good bugs and your bountiful harvest of produce.

And, since they dwell underground, they can dig a trench to your plants, devouring them in the process.

How to deter unwanted menaces naturally:

Castor Oil is one of the favorite minerals that is used with O.G.G. practices for removing the Moles and Gophers from the garden.

Not only does Castor Oil repel naturally, it also does not harm any animals or humans.