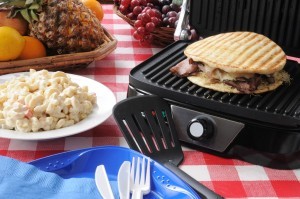 The Panini has been around since 1956. It wasn’t until around the 1970’s and 1980’s that they gained popularity in the United States. A Panini press is an accessory for cooking sandwiches. There are heated plates on the top and bottom. You place the sandwich on the bottom plate and close it. It presses the sandwich as it cooks. People put whatever they want in the sandwich such as meats, cheese, and vegetables. Some people use Panini presses to cook meats as well. They are used to cook meats such as boneless chicken.

A food dehydrator is a way of preserving food. People dehydrate several types of food including fruits and meats. One of the most well-known meat that is dried is jerky. The dehydrator heats the food to high temperatures. The high temperatures cause the water in the foods to be released. Dehydrating foods helps it from getting dangerous bacteria’s inside of it.

A salad spinner is used for removing excess water and washing lettuce. This is also known as a salad tosser. The first known accessory that was similar to the salad spinner is believed to have been used in the 19th century. The one we know of today was introduced in the 1970’s. Generally salad spinners are a plastic bowl with a strainer inside. They will be equipped with a part that turns the strainer on the inside. The excess water and dirt will fall into the bowl to be emptied later. The filter will contain the cleaned lettuce.