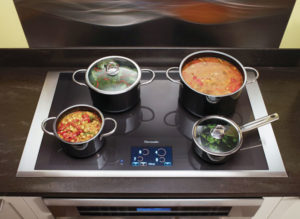 Induction cooking is a two-part system. The first is a coil of copper wire and when the electric current flows through the coil it creates energy. The second part is the pan itself. Not all pans will work on an induction cooktop. Pans that consist of 100% copper, 100% aluminum, or 100% non-magnetic stainless steel will not work.  The bottom of the pan must have an iron base in order to work, easiest way of checking is to hold a magnet to the bottom of the pan. With a traditional radiant cooktop, the entire element would heat with the surface glowing red. But not with the induction cooktop, all the electromagnetic energy passes through the cooktop and into the pan which causes the iron molecules to vibrate creating the friction that heats the pan.

This kitchen appliance heats faster than other technology that has been tested. Tests have shown that it is approximately 2-4 minutes faster to heat 6 quarts of water to near boil. Also since the surface itself does not get hot it makes it easier to clean up any spills that may occur. It typically is around 25-50% more faster than other methods which make it an interesting option for restaurants. Safety is a big advantage as there is no open flame and once the pot is removed from the heat stops automatically.

Like all things there are some cons to go along with the benefits. As mentioned earlier only pots that have an iron base on the bottom work. They do give off a noise that sounds like a buzz or humming sound. The noise gets slightly louder as the settings go higher. Also the magnetic field of the induction cooktop may interfere with a digital thermometer. So avoiding that problem by using an analog thermometer would be best.