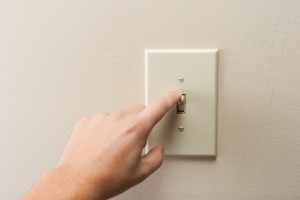 How to Replace a Light Switch

First, turn off the power that goes to the switch. Do this at the fuse panel or main circuit breaker to ensure optimal safety. When the power is off, unscrew the old light switch. Leave the wires attached – though you may need to coax them out with the blade of your screwdriver. Pull the switch out from the electrical box (leaving the wires in place) and look at the wires and where they attach to the light switch.

There will be at least two wires: a black hot wire and a return wire, which may be any color except green (commonly red or black). There may also be a grounding wire, which is green or bare copper. If there is a white wire with a piece of black tape connected to the light switch, this means it is being used instead of a colored wire – it is not neutral.

To attach the wires, strip off about half an inch of insulation with wire strippers. Use long-nosed pliers to twist the bare wire into a clockwise loop – the loop needs to wrap around the terminal screw, covering between two thirds and three quarters of the way around. The loop needs to go over the screw in a clockwise direction so that when you tighten the screw, the loop also tightens.

When you have attached all of the wires to the new light switch, simply push the switch into the electrical box and screw it into place. Remember to be careful as you do this, since using too much force may damage the wires. When the new light switch is in place, turn the power back on and try it out.