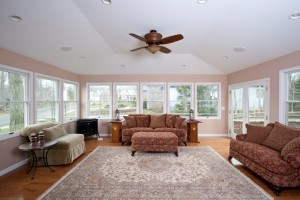 How to Install a Ceiling Fan

It has always been the affordable option to install a ceiling fan as a home-cooling system. The following steps will show you how to replace an old light fixture with a ceiling fan and light in a room without an attic above. The advantage of this method is that you don’t have to run a new wire; the fan connects to the existing cable of the old light.

NOTE: You may consider consulting with and/or hiring a licensed electrician for this task, especially if you are insure of something or existing house conditions are not typical and straight forward.

You will need the following tools: wire strippers, nail sets, a hammer, a drill, a drywall saw, a screwdriver and a caulk gun.

Step 1: Turn off the electricity to circuit and remove the glass shade from the old light fixture. Unscrew the retaining nuts/screws holding the fixture onto the ceiling, lower the fixture and disconnect the wires by twisting off the plastic connectors at the ends of the wires. 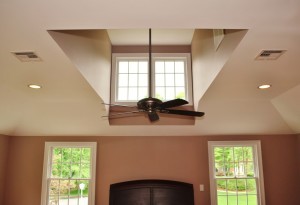 Step 2: Remove the old electrical box from the ceiling – if it’s nailed to a joist, pry it free with a flat bar; if it’s suspended from a bar, you may have to take off the metal plate, unscrew the box and then pry the bar free from the joists. Hold a 1/2-inch-thick pancake box against the ceiling, center it on a joist and trace around it with a pencil. Cut along this line with a drywall saw.

Step 3: Attach the new electricity box by feeding the electrical cable from the ceiling through the knockout hole in the pancake box (be sure there’s a cable connector attached to the knockout hole). Set the box into the ceiling-hole and press it tight against the underside of the joist. Attach the box to the joist with the two 1½-inch no. 10 hex-head screws provided, and drive in the screws with the drill/driver equipped with a 5/16-inch nut-driver tip. Then wrap the cable’s bare copper wire around the grounding screw inside the box and allow the wire end to hang down. 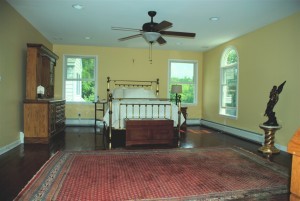 Step 4: Glue on the ceiling medallion by applying a small bead of urethane-based adhesive to the back of it. Pass the wires through the medallion, center the medallion on the pancake box and press. Fasten it with four 6d finishing nails driven into the joist. Then set the nailheads and fill with caulk or spackle.

Step 5: Mount the fan’s ceiling plate by holding it up to the pancake box and pulling the wires through its center hole. Attach the ceiling plate to the box with two 1½-inch long 10-32 machine screws. 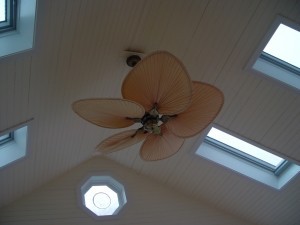 Step 8: Attach the each fan blade to a blade iron (the bracket holding the blade to the fan), then fasten the blade irons to the motor with the provided screws. Plug the fan’s light-fixture housing into the wire hanging from the underside of the motor. Then install the shades and light bulbs. Lastly, screw the plastic holder for the remote control to a wall beside the switch.

Step 9: Pour a glass of wine, and enjoy a bright, cool evening underneath your new ceiling fan. 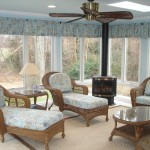 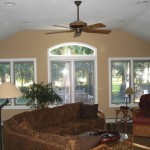 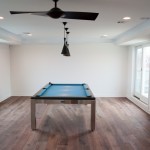