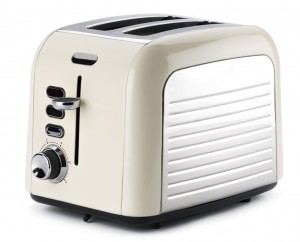 The toaster had some flaws in the beginning. Nobody knew much about the heating element. It is thin metal that heats up to toast the bread. They had to figure out a way that it could get as hot as it needed to be multiple times without breaking. The metal would become thinner after getting them several times. Them getting smaller would make them weaker and cause them to break. In 1905, an engineer solved the problem. This was a young engineer by the name of Albert Marsh. Marsh combined chromium and nickel. This is now known as Nichrome.

In the middle of the twentieth century, a few toasters had a feature that would raise and lower the bread. They no longer had leaver you had to operate. When you inserted a piece of bread in the toaster, it would turn on the power. As the heating element got hot, it would expand. The expanding of the heating element would cause the bread to lower.

A sensor would determine when the toast was done. It would then turn off and the heating element would cool down to room temperature. It would raise the toast for you to retrieve it. You could place the toast back inside, but it would only reheat it.

Toasters now have similar technology while some toasters have better technology. The toasters we now have come in different shapes and sizes. They also have a variety of features. The toaster you choose depends on whether you will be using it for home use or commercial use. It also depends on what you will be cooking. The pop-up toaster cooks smaller items, but you can cook nearly anything you can think of in a toaster oven.