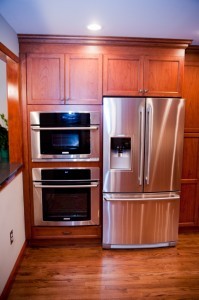 History of the Refrigerator

When you think kitchens and kitchen appliances, you think refrigerators. While there were working “fridge” models prior to 1913, this is the year when the domestic refrigerator was invented. The inventor was Fred Wolfe.

However, the prototype was improved upon the very next year by an engineer named Nathaniel B. Wales. Refrigerators really jumped in popularity in the 1920s after the invention of freon; from there, the General Electric “Monitor Top” refrigerator became the first fridge to see widespread use.

While refrigerators became popular in the 1920s, the technology of refrigeration technology really made great strides in the 1950s and 60s. During the time periods, major innovations such as automatic defrost and automatic ice makers first appears.

Over the next several decades, making the refrigerator more eco-friendly became a main priority. This focus shift led to more energy-efficient refrigerators and elimination of chlorofluorocarbons in refrigeration sealed systems.

The meaning behind the name is rather simple; refrigerator simply means a cabinet for keeping food cool.

Today, approximately 8 million refrigerators are sold per year; with about 96% of the models being top mount. This means that the freezer is above and the refrigerator is below.