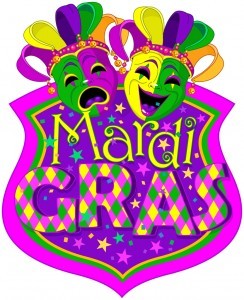 Mardi Gras, which is French for Fat Tuesday, is a Carnival celebration that starts after King’s Day and comes to an end before Ash Wednesday, the beginning of Lent which is 40 days before Easter. The precise date varies by year, same as Easter, and it is a very important holiday for Catholic European countries. It is a time is for people to enjoy eating foods typically given up during the fasting period, mostly breads and pastries, as well as other activities not permitted during Lent. One of the most popular holiday treats is the King Cake, a large cinnamon roll that can sometimes have a small plastic baby hidden on the inside. Whoever finds the baby is the next King or Queen and gets all sorts of privileges during festivities. Depending on where you are, the plastic baby might be a representation of Jesus. Pancakes are also a traditional Mardi Gras food.

Typical Mardi Gras celebrations include wearing masks, dancing, parades, competitions, ignoring social norms, and general debauchery. The organizations that put together the events are often called mystic societies or krewes. The biggest Mardi Gras festival in the United States happens in New Orleans where the first parade for the celebration took place in 1837. The city’s slogan is “Laissez les bons temps rouler” which is French and translates to “Let the good times roll” -a phrase which part of the Mardi Gras celebration gets its basis from. People from all over the country travel to Louisiana every year to take party in the festivities, including the Russian Grand Duke Alexis Romanoff in 1872. His visit is where the tradition of the parade King and Queen originated, as well as the official Mardi Gras colors of purple, green and gold, which were Romanoff house colors. Purple is for justice, green is for faith, and gold is for power.

New Orleans isn’t the only place that celebrates the holiday, however. Cities all over the world have their own sets of traditions. In Mobile, Alabama there are events leading up to Mardi Gras that start all the way back in November. Mobile was the first place in the United States to have a Mardi Gras celebration. Other cities famous for their festivals include Rio de Janeiro, Quebec City, Port of Spain, and Mazatlán. Port of Spain, in Trinidad and Tobago, despite being in such a small country, hosts one of the biggest Carnival celebrations across the globe. The season begins the day after Christmas and culminates on Fat Tuesday, featuring tons of calypso music along the way.

Taking place not long after Valentine’s Day, single people have started to use Mardi Gras as a counter celebration to the romance centered holiday, reveling in their freedom. While the holiday still very much has religious connotations to it, many non-religious people take part in the festivities.