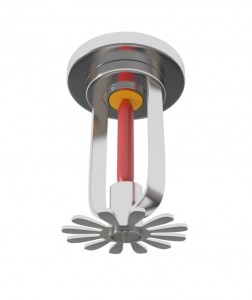 Buildings with a fire sprinkler system reduce the chance of fire related deaths. Fire sprinklers have been used to save property and its owners for more than 100 years. Earlier they were only found in offices and factories but increasing number of people are choosing to install them at their home.

A fire sprinkler system is a fire safety system that involves water supply, sufficient water pressure and flow rate to a water distribution pipe and water sprinklers. It can be installed in a new house or can be added to an old one. One of the advantages that many people don’t see in installing fire sprinkler system is that it protects the remaining house from damage caused by fire and smoke. It also delays spreading of fire and enables survivors to escape.

Fire sprinklers in a house are interconnected via a mesh of piping throughout the house. These pipes are well hidden and in case of fire, water is drawn from all water sources in the house. Without fire sprinklers you not only risk your safety but as the flames grow all combustible items in the house will fuel them.

Fire sprinkler systems can be as important to your house as central air conditioning or a security system. As per a survey conducted by American Housing, 4.6% of houses had sprinklers in 2009.

There are three types of sprinkler system: wet, dry and pre-action. Wet pipe is the most widely used; however, a selection can be made basis the requirement and the desired outcome. Wet pipe system is simple, cost effective, and easy to modify. Dry pipe are relativity costly and have high installation and maintenance cost. They do have a high fire response time though. Pre action requires a two step process to release water – the valve must activate before the water is sprinkled so they may avoid dribbling water.