Displaying an American Flag on Your Home 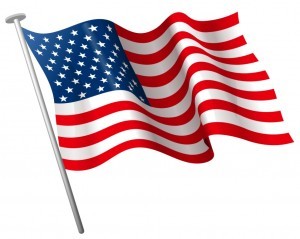 A flag is a symbol of respect and pride for a nation. United States of America has a set of laws, a Code for handling and displaying the national flag. Many states have their own laws on how to display a US flag. Even though there are no penalties for improper handling of the flag, every citizen expects the flag of United States of America be treated with grace and respect.

Some of the basic guidelines to display a US flag at home are discussed below:

One of the first etiquette to display a US flag is to always have the union (the rectangle box with the stars) at the peak. A flag hanging with its union down is a signal for extreme distress. Flags can be flown at half-staff only after a President order.

Another long standing etiquette is the flag never touches the ground, water, floor or anything else that is on the ground. US Flag is a national symbol; it should not be used as a window or a ceiling decoration or as a drapery or a bed spread. It is considered very inappropriate to use the flag to carry or hold any types of items.

Flag should also be used as a piece of apparel. It is not a dress but rather a representation of a whole nation. A US flag represents the service of countless brave soldiers who have sacrificed their lives in the battlefield for our sovereignty. A US flag also symbolizes numerous brave men and women who with serve their fellow Americans selflessly on a daily basis. They are the paramedics, firefighters, police and other service personnel. A lapel flag symbolizes the love and loyalty for our country. It should always be worn on the left side just above the heart.

An American flag is recommended to be hanged on an angled staff. This flag staff is usually attached on the front wall, balcony, porch or a windowsill. To securely attach a flag, it is recommended to use a wall bracket to the trim. To ensure the flag doesn’t get damaged or soiled fasten the staff securely on the wall.

Many homeowners prefer to hang their flags on their walls. Some people like to hang the fly on a pole in their yards. All flags must be flown horizontally in such a way that the union is always at the top. Mostly flags are displayed from sunrise to sunset. Many homeowners who like to display the round the clock, it is recommended to have the flag illuminated by a light after it is dark. There are special types of lights available in the hardware stores which are designed specifically to illuminate the flag with a nice glow.

The US flag is a proud symbol of a rich and diverse history of our nation. The stripes and starts denote our 200 years of respect and bravery showed in the most adversarial conditions by our brave men and women.