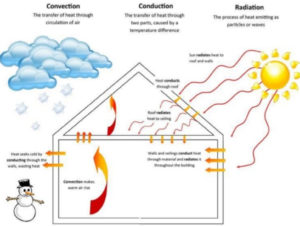 Have you have ever felt like was a draft in the winter while you were standing inside next to a solid wall or large picture window? There might not be a an air leak at all. An outer wall and window in the winter will be colder than your body temperature. Heat seeks an an equilibrium, a balance, so it will leave your body through your skin and go toward the colder surface. That transfer of heat actually feels like a cold draft on your skin.

When heat moves through a window, there are three forces at play.

First, there is conduction. This is the passage of heat thru a solid material. The material that you use in your window frame (aluminum, vinyl, wood, etc) will have a major impact on the overall conduction power of the window.

Secondly, there is the force known as convection. This is the transfer of heat by the movement of gases or liquids. A convection current of air is created when warm air from inside a home comes in contact with a cold window. Still air is a good insulator, while moving air is not.

Lastly, solar heat gain radiation plays a major role in the process. Radiation is the transfer of heat from one solid to another through electromagnetic wave. The most prominent radiant heat comes from the sun. How much solar radiation passes through a window depends on the season, window location, and how much shade is provided.

When considering a window for your home, there are two main things to look at. The first is the U-Factor, which indicates the rate (how quickly) heat flows through a window. The second rating is the solar heat gain coefficient. The SHGC measures the percentage of solar radiation that passes through a product. The windows with the lowest SHGC keep the most direct solar heat out of the home.