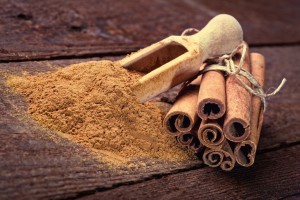 Today, Organic Gurlz Gardens of Fort Wayne, Indiana will be sharing information on the Benefits of Cinnamon.

From tossing into dishes or sprinkling on a sweet potato, there is nothing in comparison to the delicious spice of Cinnamon.

Organic Gurlz Gardens is here to tell you about some of the awesome stuff Cinnamon does!

Cinnamon is a cherished spice at Organic Gurlz Gardens; and a favorite seedlings too!

You may have heard the term “dampening” before. No, I am not talking about making a paper towel wet. “Dampening off” covers a wide spread of diseases and that attack a seedling either before or after germination and cause the seedling to die. They can be caused by several different fungus and soil conditions. It is a common practice at O.G.G. to dust the soil with Cinnamon. This simple step will prevent dampening.
(This method also repels those little gnats that mysteriously appear around seedling trays.)

Cinnamon – the ONE thing ants hate

Sprinkle a bit of Cinnamon in your greenhouse, your outdoor kitchen or around your garden beds. ** This will not kill the ants, but they are sure to stay away from it.**

Using Cinnamon around our organic garden beds is common for O.G.G.
Whenever we go into the garden, the air carries a delightful scent!
Place some Cinnamon by your doors if ants are coming into your house. They really hate to cross a line of cinnamon!

The Best outcome for your garden is Organic Gurlz Gardens!
We guarantee our raised garden beds for 5 years, with maintenance and care.

Getting rid of those bad weeds

Use cinnamon oil to demolish the garden of weeds. Put some of the oil in a spray bottle and aim directly to the weed only. Due to the potency of cinnamon, be cautious not to allow the spray to touch the garden plants as it may damage them.

From deterring ants to gnats and all in between, Cinnamon is one of the greatest spices to put in your garden!