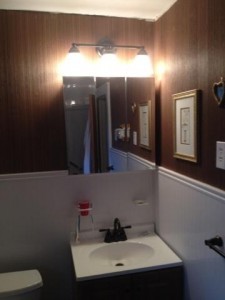 Time was of the essence for this North Plainfield homeowner. The bathroom’s tired interior gave the wrong impression to visitors to the home and it was time for an upgrade that was both cost effective and fast.

Mark of Excellence’s Project Designer actually met with the couple on July the 4th. They had specific requirements for comfort and safety. There were a lot of loose tiles and evidence of mold growth present; which was of growing concern to the homeowners; and even new buyers. They needed to convert their old tub area into a shower that included a built in seat and grab bars; an important combination for both mature and physically challenged individuals.  They also needed to remove old tile to the floor and walls in the room. Another goal was to replace the toilet and vanity with a style that is much more contemporary and fresh. A traditional bathroom remodel was going to exceed their budget and take much longer than they anticipated. 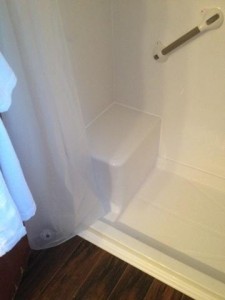 The Project Designer determined that the makeover could be completed in a timely and cost effective manner using a bath liner system; Bathwraps from Liners Direct. Mark of Excellence Remodeling is the exclusive New Jersey dealer for the system which is offered in a variety of styles and textures. The system which can only be installed by factory trained technicians includes Silver Shield; a mold deterrent that is a component the Acrylic elements of the installation.  The wet space solution included removing the existing tub and changing for a custom shower pan with an integrated seat. The wall system was in a neutral white to compliment the shower and of course grab bars were specified.  The homeowner wanted a wood floor and the Project Designer introduced them to a ceramic floor tile in a wood plank finish that would be much more practical in a bathroom with high moisture content. The wall tile was encapsulated by an acrylic wainscoting which would require no painting and the vanity and toilet were changed out with new.

The completed Bathroom Makeover was executed in just a few days after all specialty components were delivered. Finally the homeowner selected the perfect wall covering that pulled all the components together; floor tile, shower with seat , wainscoting and walls result in a dramatic and cost effective bathroom solution.

Below, you can see the before pictures, followed by the completed after pictures. 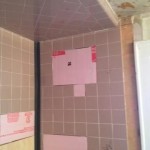 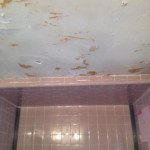 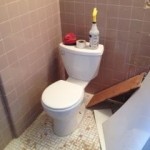 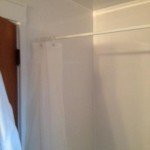 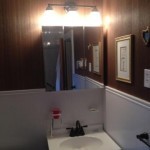 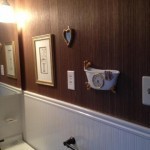 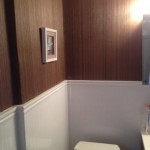 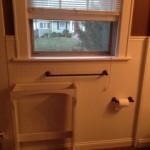 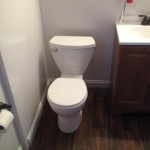 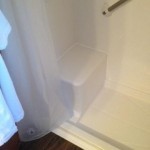 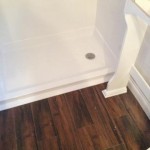 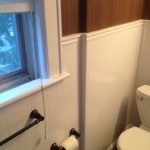