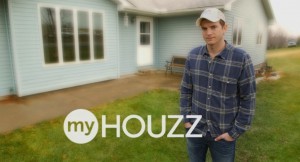 Ashton Kutcher was born in a small town in Iowa. When Kutcher was in High School, he and his stepfather, Mark, built the home. Mark and his wife (Ashton’s mother) still live in the home today. When Ashton comes back to visit, he stays in the basement. The basement area is very dark and it includes a bedroom with no windows, a storage area that is unfinished, a main living area with exercise equipment, and old memorabilia and recliners. Ashton and Mark wanted to renovate the space as a surprise for Ashton’s mom, Diane. Kutcher is a Houzz user and investor, and this was his main way to go about the project while living in Los Angeles.

Kutcher created an ideabook (as Design Build Planners insists their clients do), founded a local interior designer in Iowa named Catherine Thomas, and bought nearly all the new furnishings from the Houzz Shop.

The main objectives of the basement remodel were to brighten the area and add more functional space in order to accommodate more guests. All new lighting and two large windows flanking the fireplace help to brighten up the area.

To create a look more in line with Diane’s style, Catherine set up a clean, natural and neutral backdrop for the couple’s possessions with a hint of traditional and rustic flair. There’s a lighter feel to the space thanks to the addition of linen by way of the sofa, cube pillows and lampshades.

Better seating and more attractive framing for the memorabilia were two important upgrades. Further, built in shelving was added in the stairs so that Diane could have a place to store, yet display her antiques. The bedroom moved from one corner of the basement to another. The original bedroom got divided up to create more space for the bonus room and lockable storage. The new bathroom stayed in the same location but was expanded to add a shower. Beyond this, a separate room was created to store food items that Diane had made and canned. Further, a work space and changing room were added.

First, there is a picture of the existing space. After that, there are pictures of the project, and different elements used in it. 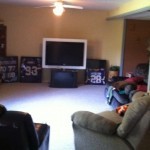 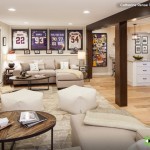 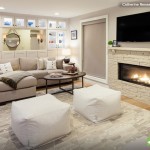 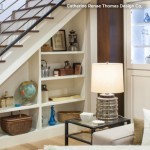 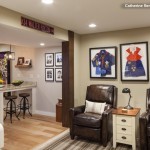 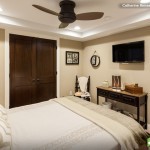 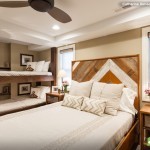 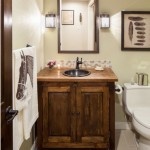 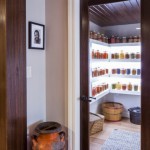 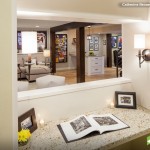 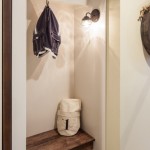