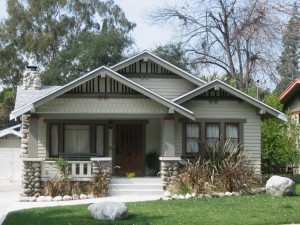 It is called an American Bungalow Style Home, but you would be surprised to learn they were popular in India as well. In India, they are called bangala or bangla. The bungalow style homes in India were single family homes. The British Colonists were the first people to build this type of home upon their arrival to America. These were to be summer homes for the British. It is thought that they were inspired by British cottages and army tents. The houses had a central living area. Other rooms were clustered around the central living area. These areas are bedrooms, a dining room, a bathroom, and a kitchen attached to the central living area. The American Bungalow Style Home is a two story house while the ones in earlier times were single story homes.

William Gibbons Preston designed the first American bungalow. It was created in 1879. We never think of elaborate homes when we think of a bungalow. However, the first American bungalow was an elaborate home for the era. It was a much larger home than people were accustomed to seeing. The home was a two story house built at Monument Beach located in Cape Cod, Massachusetts. America was inspired to build bungalows by the Greene brother. The brothers are Henry Mather Greene and Charles Sumner Greene. They designed more up-to-date bungalows in California. The new designs were one and one-half stories. The style became popular; so popular that you could order the kit to build one from Sears and Roebuck. There are features that we think of when we hear bungalow in the United States. 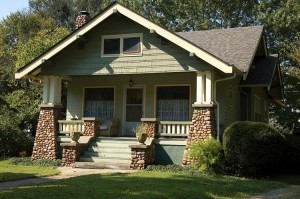 Most of the living space in an American Bungalow is on the ground floor. It contains a living area at the center. Rooms are connected to the living area without hallways. The seats, cabinets, and shelves are usually built-in. The roof is low and has a horizontal shape. There are many varieties of bungalows. Chicago Bungalows and California Bungalows are the most popular. The origins of this style of the house came from India. You will find that you can build a traditional tow story home cheaper than you can a bungalow. The bungalow has a different meaning depending on what part of the world you are in. Bungalows are great homes for the elderly or handicapped because the living quarters are on one floor and they don’t have stairs for you to climb. Many people plant tall shrubs in front of a bungalow. People also plant tall trees around the house so that the neighbors can’t see inside the second-floor window. This makes having privacy easier than it would if you lived in a traditional two story home. There are neighborhoods that have only bungalows. Many people like these neighborhoods other than suburbs full of two story homes. The privacy in areas that have bungalows are better if you like to have privacy from the neighbors.